The researches on the family were taken and then expanded and they were about the quota of patients and on the remote ancestors. A true picture of what really happened in 150 years was obtained. The disease seems to appear in the family in the middle of 1800. The pedigree includes 288 members of 6 generations. The reconstruction of the events, that was obtained by skinny documentary sources and by the scarce oral testimonies, still can make clear what happened in these families, which became numerous in the end of 1800, when the disease intensified its incidence. The family tree enabled they to understand that the mode of transmission was autosomal dominant, never noticed it before because of the apparent episodic nature of the disease. Even today they talk about premature and mysterious deaths around which stood silence. Memories of women and men interned in mental hospitals survive. Presenile dementia, leukoencephalitis, alcoholic encephalopathy, dissociative syndrome and even stroke (ictus) were the diagnosis that were issued. The most accurate define the affection as a family encephalopathy. The inevitable break-up of the offspring, the slack until the extinction of the relationship between parental families, the emigration often collective, favored the blend of the disease in episodic series. The mystery and tragedy remained hidden. The genealogical study has not only allowed to collect a mere amount of data sometimes incomplete and therefore necessarily offered to the interpretation. As these histories were drawn from the archives, they proceeded, as far as possible, in search of medical recordsand of autopsy material, often with success. The genealogical system allowed the levy to 55 family members for DNA analysis. The genetic fatal insomnia was found also in the USA, in France, Germany, Austria, China, Japan, and in another Italian family. 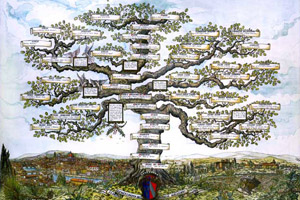